This is the bust of Alduin, the World Eater. There is a hole in the back of the model for easy wall mounting and faster printing.

Alduin (also called the World Eater, the Nordic God of Destruction, and ALDUIN in Dragon language), is a dragon and the primary antagonist in The Elder Scrolls V: Skyrim. He was first removed from Tamriel through the last resort of the ancient Nord heroes who used an Elder Scroll to force Alduin to become lost in time and hopefully never return. Instead, he was sent forward to the Fourth Era, to the timeline of events in The Elder Scrolls V: Skyrim. Alduin's triumph would ensure Nirn's destruction. His name in Dragon Language means 'Destroyer Devour Master.' 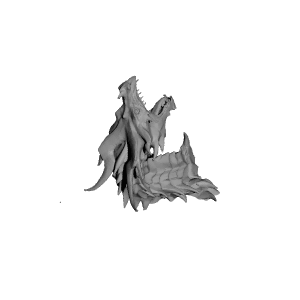 I printed and hand painted this Alduin head for a coworker