3D
Support Free Scan The World
4,694 views 507 downloads
3 collections
Community Prints Add your picture
Be the first to share a picture of this printed object
0 comments

This is my 3D capture of the Skulpturhalle Basel's plaster cast of the Museum of Fine Arts, Boston's marble head of Alexander as the sun god Helios.

The Getty Museum describes Alexander as "the first Greek ruler to understand and exploit the propagandistic powers of portraiture," carefully identifying himself with "characteristics that had been used earlier for the representation of gods and heroes."

The colossal head is either from second century Egypt, or it's a 19th century forgery—artifice heaped upon artifice.

No matter that it's not on public display at the Museum of Fine Arts; you can now forge your own.

Alexander Helios (Greek: Ἀλέξανδρος Ἥλιος; late 40 BC – unknown, but possibly between 29 and 25 BC) was a Ptolemaic prince and was the eldest son of the Macedonian queen Cleopatra VII of Ptolemaic Egypt by Roman triumvir Mark Antony. Alexander's fraternal twin sister was Cleopatra Selene II. The twins were of Macedonian Greek and Roman heritage, Cleopatra named her son after her collateral ancestor, Alexander the Great. His second name in Ancient Greek means "Sun"; this was the counterpart of his twin sister’s second name Selene (Σελήνη), meaning "Moon".

I printed this without any supports, at 0.15 mm layer height with white PLA from Real 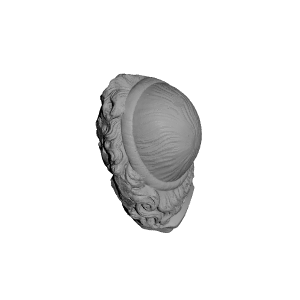