3D
Scan The World
3,055 views 279 downloads
3 collections
Community Prints Add your picture
Be the first to share a picture of this printed object
0 comments

From the British Museum

Scanned by Cosmo Wenman. For more photos, descriptions of my reinventions, and info, go to http://cosmowenman.com

Hellenistic Greek, 2nd-1st century BC
Said to be from Alexandria, Egypt

Youthful image of the conqueror king

Printed life size in PLA on a MakerBot Replicator.

I made these pieces in an attempt to show that, with the right finishes and attention to detail, 3D printers can produce objects of art worthy of public and private display. Not just miniature figurines, or toys, or practical household objects, and not just prototypes. They can do more than evoke the desired object, they can be objects of desire.

But I chose these subjects in particular--elemental, archetypal museum pieces--to try to advance a different but complementary idea; that with 3D scanning and 3D printing, private collectors and museums have an unprecedented opportunity to recast themselves as living engines of cultural creation. They can digitize their three dimensional collections and project them outward into the public realm to be adapted, multiplied, and remixed.

They should do this because the best place to celebrate great art is in a vibrant, lively, and anarchic popular culture. The world's back catalog of art should be set free to run wild in our visual, and now tactile, landscape, and whether it turns up lit in pixels on our screens, rematerialized in our living rooms, or embedded in our architecture or clothing, it's all to the good.

And for forward-thinking, innovative institutions and collectors, and for everyone involved in this young industry, there's prestige, money, value, meaning, and beauty to be made in making it a reality.

From the British Museum:

"Literary sources tell us, though perhaps not reliably, that Alexander (reigned 336-323 BC) chose only a few artists to produce his image, and famous names such as the sculptor Lysippos and the painter Apelles were associated with his portraiture. Though none of the famous images have been recovered, many sculptures in different materials, as well as portraits on gemstones and coins, survive. These were mostly produced long after Alexander's death and while the portraits follow similar general characteristics, they also vary in style.

Alexander was always shown clean-shaven, which was an innovation: all previous portraits of Greek statesmen or rulers had beards. This royal fashion lasted for almost five hundred years and almost all of the Hellenistic kings and Roman emperors until Hadrian were portrayed beardless. Alexander was the first king to wear the all-important royal diadem, a band of cloth tied around the hair that was to become the symbol of Hellenistic kingship.

Earlier portraits of Alexander, in heroic style, look more mature than the portraits made after his death, such as this example. These show a more youthful, though perhaps more god-like character. He has longer hair, a more dynamic tilt of the head and an upward gaze, resembling his description in literary sources.

This head was acquired in Alexandria, the city founded by Alexander in 331 BC, and the location of his tomb. Alexandria was also the capital of the longest surviving Hellenistic dynasty, the Ptolemies. From the time of the reign of Ptolemy I Soter ('Saviour') (305-282 BC), Alexander was worshipped as a god and the forefather of the dynasty." 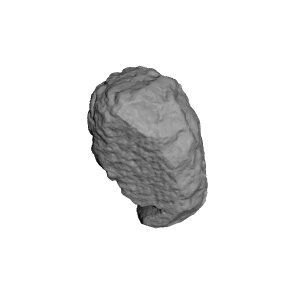