Alexander the Great as a Young Herakles at The Metropolitan Museum of Art, New York

3D
Scan The World
3,380 views 175 downloads
2 collections
Community Prints Add your picture
Be the first to share a picture of this printed object
0 comments

Alexander the Great as a Young Herakles at The Metropolitan Museum of Art, New York

This striking head depicts a young man wearing the scalp of a lion as a helmet, the lion pelt being the signature attribute of the hero Hercules after he slayed the Nemean lion. A similar representation of a youthful, beardless Hercules in a lion-head cap was employed on coins issued by the Macedonian king Alexander the Great to allude to his descent from the mythical hero; it was later adopted in the coinage of the Hellenistic kings to represent Alexander himself. 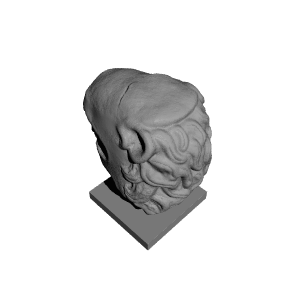