Alexander The Great at The Louvre, Paris

3D
Scan The World
4,126 views 201 downloads
4 collections
Community Prints Add your picture
Be the first to share a picture of this printed object
0 comments

Alexander The Great at The Louvre, Paris

Thanks to its original antique inscription, this figure can be definitely identified as Alexander the Great, son of Philip II of Macedon. The leonine hair brushed up from the forehead is characteristic of portraits of the Macedonian sovereign. The work is a copy of the head of a work from 330 BC attributed to Lysippos - doubtless the statue of Alexander with a bronze lance mentioned by Plutarch (Moralia, 360 d). The Louvre's small bronze, Br 370, is another copy of the same work.

This work takes the form of a herm: a pillar whose upper part has been sculpted in the shape of a head. It shows a young man, his head slightly lifted. The features are idealized, but there is a a degree of individualization in his inspired expression, and the mane of hair falling in strands on his forehead.
The authenticity of the antique inscription - which identifies the bust as that of Alexander the Great - is open to discussion, but the physiognomy of the figure leaves no doubt. The particular arrangement of the hair is well attested in other images of the Macedonian conqueror.

This bust was part of a gallery of herms featuring portraits of famous men, unearthed in 1779 during an excavation at Tivoli organized by Joseph Nicolas Azara, the Spanish ambassador to the Holy See and, later, to France. For a time, this was the only known portrait of Alexander the Great; the value and significance of Azara's gift of it to Napoleon Bonaparte was, then, considerable. The date of the presentation is uncertain: according to some texts, Azara intended to offer it as a diplomatic gift during the negotiations surrounding the Armistice of Bologna in 1796, as a gauge of the Holy See's good will towards . Nevertheless, the inscription tells us that Napoleon received the herm during his time as First Consul, ie. not before 1803, the year in which he gave the work to the Louvre (as indicated by the inscription on the right-hand side of the pillar). The inscription, together with Bonaparte's other imperial symbols, was probably made after his downfall in 1815.

This bust was badly damaged during its time underground, and has been extensively restored. It is, nevertheless, the portrait of Alexander that comes closest to the work of Lysippos, a Greek artist of the fourth century BC. Lysippos's fame is due as much to his works in bronze as to his status as Alexander's official portraitist. Contemporary sources tell us that the sovereign authorized only three such artists: the sculptor Lysippos, the gem-engraver Pyrgoteles, and the painter Apelles.
No direct trace of Lysippos's work has come down to us. Most antique bronze statues disappeared long ago, and are known only through small bronze copies or Roman versions in marble. The Azara Herm and the bronze Br 370 are copies of the same original, created by Lysippos around 330 BC. Alexander is shown looking upwards, as if to challenge the gods themselves. This vision of the inspired ruler, widely copied by Alexander's successors and imitators, became a standard model for Hellenistic royal portraiture. 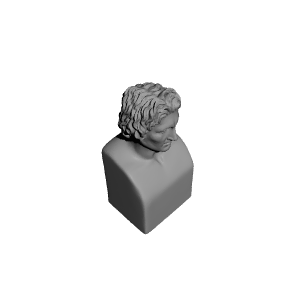 ×
4 collections where you can find Alexander The Great at The Louvre, Paris by Scan The World