3D
360°
Scan The World
2,717 views 103 downloads
1 collection
Community Prints Add your picture
Be the first to share a picture of this printed object
0 comments

Originally from Pennsylvania, Alice Cooper married John L. Cooper in the 1850s. Sources vary on the specifics. John Cooper’s diary (via Archivegrid) indicates that they married on the East Coast in 1852, and the Sacramento Daily Union newspaper that they married in Santa Cruz on July 4, 1859. Without a scan or physical copy of the diary pages, it may be supposed that “1852” is an error in transcription, and that 1859 was the actual year of marriage.

While little information on Alice is available, John L. Cooper was a prominent businessman in Santa Cruz. He moved west from PA in 1849. He was the Santa Cruz County Supervisor for many years. He and his brother William, who became the city’s first mayor in 1876, gave land for the first county courthouse to be built. 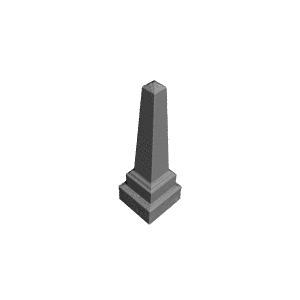