3D
Scan The World
1,470 views 69 downloads
Community Prints Add your picture
Be the first to share a picture of this printed object
0 comments

The great Scottish portrait painter, Allan Ramsay (1713-1784), first went to Italy for the sake of his career. Leaving behind his fiancée, Anne Bayne, he spent two years training in Florence and Rome. This was the foundation of his future success, which enabled him to return to the country for more personal reasons. He spend 1754-6 in Rome with his second wife, Margaret Lindsay, absorbed in artistic and antiquarian pursuits. Two further visits were made in old age, to relieve his faltering health and revisit 'the haunts of ancient genius and learning'.

Foye's portrait bust, carved during Ramsay's third visit, reflects his growing historical interests: with cropped hair and toga draped over his shoulders, the artist has been transformed from eighteenth-century Scot into a citizen of ancient Rome.

Like many Enlightenment figures, Ramsay was fascinated by the classical past and he undertook four extended visits to Italy. This bust was sculpted during the artist’s third stay in Italy. Appropriately, Foye shows Ramsay draped as if wearing a toga, like an ancient Roman senator. The face is realistically observed, revealing an ageing man. Ramsay was, by this time, in poor health; in 1773 he had dislocated his shoulder falling from a ladder and was no longer able to paint. He made his final visit to Italy in 1782 and died in Dover on his way home. 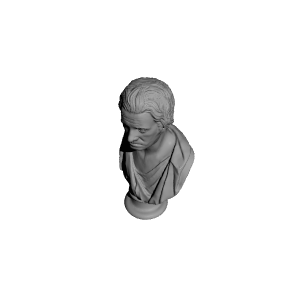