3D
Scan The World
2,366 views 186 downloads
2 collections
Community Prints Add your picture
Be the first to share a picture of this printed object
0 comments

Edoardo Piccoli has explained that the final decision to make architecture a woman “with a compass, square ruler, and plumb line apparently stemmed from a debate on drawing arts sparked in Florence in Vasari’s time. One memorable date that has at least a symbolic importance is 1565 when Giovanni Bandini was entrusted with sculpting a personification of Architecture mourning on Michelangelo’s grave. Although it was a point of arrival and not an innovation, that was definitely an authoritative reference for other works, such as Giambologna’s refined statue – a truly divine nude, dressed only with the profession’s attributes – and its models, precious ‘copies’ destined to travel across Europe from one court to the next.”

Piccoli also noted “nudity, while expected in Giambologna’s work, was an extraordinary choice in representing Architecture, because lavish clothes usually helped suggest the decor and ‘variety’ of architecture. A woman, a compass, a square ruler, and a handful of other recognizable traits: this incarnation of Architecture, at the basic level of allegory, presented changeable and often ambiguous features. After all, the compass, square ruler, and drawings are also attributed to other figures, and only when all together, and in certain contexts, can come to mean ‘Architecture’” 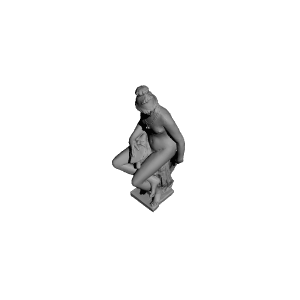