3D
Scan The World
2,282 views 106 downloads
2 collections
Community Prints Add your picture
Be the first to share a picture of this printed object
0 comments

One of the most celebrated monuments of Copan, is from the West Court of the Acropolis, at the base of Structure 16's staircase. As a tribute to the Copan dynasty, the 16th ruler Yax Pasaj Chan Yopaat is shown seated on the right on date of his accession to power, 6 Caban 10 Mol or July 2, 763 AD. He symbolically receives the baton of office from the first ruler K’inich Yax K’ uk’ Mo’, and from his 14 other predecessors. Each ruler is seated above his name glyph, starting with the first and going chronologically clockwise around the monument. This was a form of propaganda, intended to show that Yax Pasaj was just as worthy of rule as the first leader.
The text carved on the top of the altar refers to historical events involving the Copan dynasty, not to an astronomical conference as once thought. 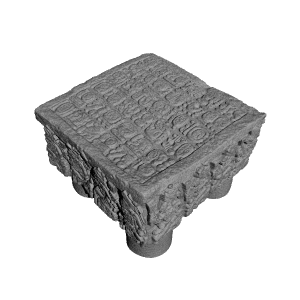