3D
Support Free Scan The World
2,242 views 132 downloads
1 collection
Community Prints Add your picture
Be the first to share a picture of this printed object
0 comments

The faceted flower vase copy the form of silver vessels. Their decoration combines motifs from silver and from ancient bronzes. From the 13th- 14th Century, this piece is part of the Yuan dynasty culture. The Yuan dynasty, officially the Great Yuan, was the empireor ruling dynasty established by Kublai Khan, leader of the Mongolian Borjigin clan. Although the Mongols had ruled territories including today's North China for decades, it was not until 1271 that Kublai Khan officially proclaimed the dynasty in the traditional Chinese style. His realm was, by this point, isolated from the other khanates and controlled most of present-day China and its surrounding areas, including modern Mongolia and Korea. It was the first foreign dynasty to rule all of China and lasted until 1368, after which its Genghisid rulers returned to their Mongolian homeland and continued to rule the Northern Yuan dynasty.

The Yuan dynasty is considered both a successor to the Mongol Empire and an imperial Chinese dynasty. It was the khanate ruled by the successors of Möngke Khan after the division of the Mongol Empire. In official Chinese histories, the Yuan dynasty bore the Mandate of Heaven, following the Song dynasty and preceding the Ming dynasty. The dynasty was established by Kublai Khan, yet he placed his grandfather Genghis Khan on the imperial records as the official founder of the dynasty as Taizu. In the Proclamation of the Dynastic Name, Kublai announced the name of the new dynasty as Great Yuan and claimed the succession of former Chinese dynasties from the Three Sovereigns and Five Emperors to the Tang dynasty.

Printed for PRINT3Dforum.com Printed in Vase Mode you'll save lots of Filament and you won't loose any detail. No support required. 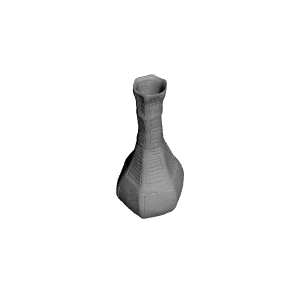 ×
1 collections where you can find Altar Vase 2 at The British Museum, London by Scan The World