Altarpiece the assumption of the virgin

3D
Scan The World
1,831 views 93 downloads
Community Prints Add your picture
Be the first to share a picture of this printed object
0 comments

Altarpiece the assumption of the virgin

This altarpiece, made of tin-glazed terracotta, depicts the Assumption of the Virgin, a popular theme especially in 15th and 16th century Tuscany. It is attributed to Andrea della Robbia's workshop. The design is a modified version of a more complex altarpiece created by Andrea della Robbia for a church in La Verna. This work may have been commissioned by the Canigiani family as it is believed to have originally come from the Canigiani family villa in Tuscany.

The Della Robbia family was an Italian family of sculptors and potters. They were active in Florence from the early 15th century and elsewhere in Italy and France well into the 16th. Family members were traditionally employed in the textile industry, and their name derives from rubia tinctorum, a red dye.
Luca della Robbia founded the family sculpture workshop in Florence and was regarded by contemporaries as a leading artistic innovator, comparable to Donatello and Masaccio. The influence of antique art and his characteristic liveliness and charm are evident in such works as the marble singing-gallery for Florence Cathedral. He is credited with the invention of the tin-glazed terracotta sculpture for which the family became well known.

His nephew Andrea della Robbia, who inherited the workshop, tended to use more complex compositions and polychrome glazing rather than the simple blue-and-white schemes favoured by his uncle.
Trained as a marble sculptor in the studio of his uncle Luca, Andrea della Robbia also became an excellent modeller, unrivalled in his ability to capture the life of his subjects in glazed clay. His best-known works are 10 roundels of infants on the façade of Florence's Foundling Hospital (about 1487). 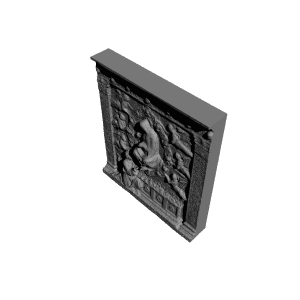