3D
Scan The World
4,715 views 234 downloads
Community Prints Add your picture
Be the first to share a picture of this printed object
0 comments

This figure represents Amitabha Buddha, the Buddha of infinite Light. According to the inscription on the base, it was dedicated to the Chongguang Temple in Hancui village in AD 585. The presumed location is southwest of Baoding in present-day Hebei province in north China, in a region known for its white marble sculptures.

Amitabha is the principal Buddha of the Pure Land sect popular in China in the sixth to seventh centuries. Faith in Amitabha is believed to ensure rebirth in his Pure Land, where obtaining an enlightened state is guaranteed. Buddhism was made a state religion under the Buddhist emperors of the Sui dynasty, who achieved the reunification of much of China by AD 589. The Sui Emperor Wendi (reigned AD 581-604) and his successor sought to legitimise their ascent to the throne by publically displaying their devotion, and they constructed numerous temples across the empire.

This statue, once covered with gilding and colourful pigments, was flanked by two smaller figures of bodhisattvas (enlightened beings). The inscription on one of the bodhisattvas reveals that the temple that first housed the triad was destroyed in a fire and rebuilt during the Tang dynasty in AD 685.

Although Buddhism spread throughout China, it was a foreign religion whose principles did not always concur with traditional Chinese values. Buddhist imagery was often accompanied by Chinese motifs, reflecting Buddhism's adaptability and Chinese inclusiveness.

Most of the Chinese sculpture from the fourth to the fourteenth century is Buddhist. The two emperors of the Sui dynasty (AD 589-618) were both devout Buddhists and they are recorded as being responsible for the creation and repair of many Buddhist images. This marble figure of the Buddha Amitabha, the Buddha of the Western Paradise, is thought to be one such work. The inscription in its base records that it was dedicated at the Chongguang temple in Hancui village in the fifth year of Kaihung, AD 585. The hands are missing but the right hand would have been raised, palm outwards in the gesture of reassurance (abhaya mudra), and the left hand lowered in the gesture of liberality (varada mudra). The figure has a very solid form and drapery in extremely flat folds, typical of the Sui period.

The Buddha Amitabha was originally accompanied by a smaller standing <href="ilink|,_blank|">bodhisattva, which is now in the Tokyo National Museum.

(source from The British Museum's website and accompanying text in museum) 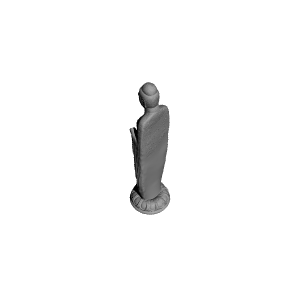 ×
0 collections where you can find Amitabha Buddha at The British Museum, London by Scan The World