An Egyptian Granite Head of Sekhmet

3D
Scan The World
1,977 views 72 downloads
Community Prints Add your picture
Be the first to share a picture of this printed object
0 comments

An Egyptian Granite Head of Sekhmet

Sekhmet was the most important of Egypt’s leonine deities. She was originally a Memphite god who came to be associated with the Theban goddess Mut, consort of Amun. She had two distinct facets to her personality, on the one hand a dangerous and destructive aspect and on the other a protective and healing aspect. Her name means “powerful” or “the female powerful one.” Because Sekhmet was said to breathe fire against her enemies, the hot desert winds were referred to as the “breath of Sekhmet.” She was also directly associated with plagues, and the goddess had the power to ward off pestilence and function as a healing deity, as noted in her epithet, “Sekhmet, mistress of life.” She was typically depicted with a human female body sheathed in a tight-fitting gown and a lion’s head often crowned with a sun disk. 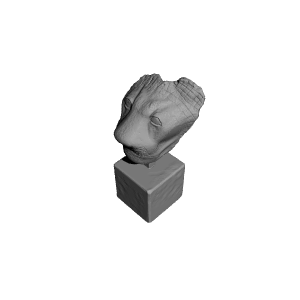