In 1888, Denys-Pierre Puech modelled and exhibited his plaster version of Muse d'André Chenier (ENG. André Chenier's Muse) in the Paris Salon (no. 4554). The state commissioned a marble version of the work, which was exhibited the following year (no. 4839) and subsequently installed in the Musée du Luxembourg.

André Chenier was a well-known royalist poet guillotined in the final days of Robespierre's reign of terror. It was during the 141 days he spent incarcerated in the St Lazare prison prior to his execution that Chenier met Anne Francoise-Aimée de Franquetot de Coigny, the woman who became his muse, and whom Puech has depicted cradling the poet's head with her hair in this sculpture. 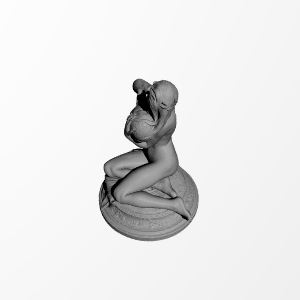 height is around 17 cm, used support, will upload painted version later. thanks for very nice and detailed scan :)