3D
360°
Scan The World
2,806 views 262 downloads
7 collections
Community Prints Add your picture
Be the first to share a picture of this printed object
0 comments

In ancient Egypt, the practice of mummifying animals became widespread in the first millenium B.C. Until the advent of Christianity, visitors to temples could buy animal mummy bundles as offerings to the gods. Wealthier pilgrims could also splurge on elaborate coffins shaped as creatures to hold these mummies, which ancient Egyptians probably believed represented the souls of the gods. Along with the sale of animal mummies, the production of lavish bronze and wooden coffins must have been an important source of revenue for temples.

This coffin was dedicated to the falcon god Horus. 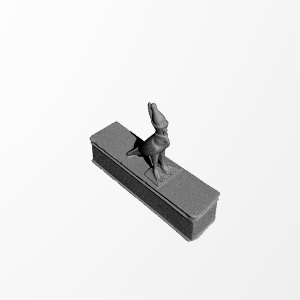