Anna Archer at the Middelheim Museum

3D
Scan The World
4,029 views 182 downloads
Community Prints Add your picture
Be the first to share a picture of this printed object
0 comments

Anna Archer at the Middelheim Museum

Anna Ancher (18 August 1859 – 15 April 1935) was a Danish artist associated with the Skagen Painters, an artists' colony on the northern point of Jutland, Denmark.Anna Ancher was considered to be one of the great Danish pictorial artists by virtue of her abilities as a character painter and colorist. Her art found its expression in Nordic art's modern breakthrough towards a more truthful depiction of reality, e.g. inBlue Ane (1882) and The Girl in the Kitchen (1883–1886). Ancher preferred to paint interiors and simple themes from the everyday lives of the Skagen people, especially fishermen, women and children. She was intensely preoccupied with exploring light and color, as in Interior with Clematis (1913). She also created more complex compositions such as A Funeral (1891). Anna Ancher's works often represented Danish art abroad. She was awarded the Ingenio et Arti medal in 1913 and the Tagea Brandt Rejselegat in 1924.

Astrid Noack (30 January 1888 – 26 December 1954) was a Danish sculptor who specialized in the human figure, creating works such as the statue of Anna Ancher in Skagen, and her Standing Woman which was included in the Danish Culture Canon.Born in Ribe, in 1902 Noack went to Copenhagen where she earned a living painting porcelain at the Aluminia faience factory. She then attended Vallekilde Højskole, specializing in sculpture and qualifying as an apprentice in 1910. She continued her studies there under Ivar Bentsen who exerted a considerable influence on her, together with other artists, especially Joakim Skovgaard, from the folk high schoolenvironment. In collaboration with Skovgaard, she helped to decorate the ceiling ofViborg Cathedral (1948) working as a wood carver. There she also met Niels Larsen Stevns and Arne Lofthus, both of whom encouraged her to work independently as a sculptor.In 1920, on a grant, Noack went to Paris which at the time was the focus of the most significant trends in sculpture. She met Adam Fischer who played an important part in her development and in conveying French ideas to Scandinavia. She also befriendedLena Börjeson who had founded the Académie Scandinave free school of sculpture which arranged exhibitions and informal instruction. She studied French Gothic sculpture with the French sculptor Jean Osouf until in 1926 she became a pupil of Fischer and of the French sculptorsCharles Despiau and Paul Cornet who helped her to develop her own style. She was the only women to benefit from the French approach to Classical Modernism.

Noack's sculptures are inspired by contemporary French art. Expressing an intense relationship between life and art, they focus on the human figure, often simply standing, sitting or kneeling. At a time when mankind was frequently treated with contempt, Noack strove to demonstrate her faith and trust in the human community. Her works are sincere, emanating an almost pious hope that people would again come together. Noack exhibited frequently, not just in Denmark but in Paris, Budapest, Helsinki and Rome. In 1955, Kunstforeningenarranged a large retrospective exhibition, as did Holstebro Art Museum in 1988. Noack was awarded the Eckersberg Medal in 1940 and the Thorvaldsen Medal in 1954.

This print is made on MakerBot Replicator Fifth Generation. The dimension of the model 130mm x 48mm x 49mm, Infill 30%, with support and layer high 0,2. Provides very nice results! 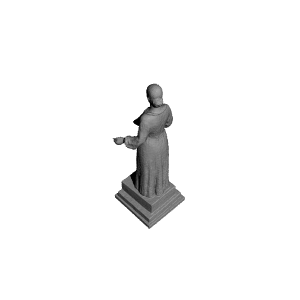