3D
Scan The World
2,086 views 65 downloads
Community Prints Add your picture
Be the first to share a picture of this printed object
0 comments

The presented specimen of repoussé belongs to the collection known under the dry name of “Rybinsk Discoveries I”. To date, the collection includes four outstanding objects, each with an unusual story of discovery. All the discoveries represent anthropomorphic figures performed in a similar style and attributed to the Kulai culture of the early Iron Age based on a number of characteristics.
In 1977, when students were doing their ethnographic fieldwork in Verkhneketsky District, locals brought three “bronze idols” to supervisor Eleonora Lvova. According to the locals, the idols had been found while digging a well on the southern skirts of the village of Rybinsk, close to the vocational college parking garages. The same year, the area was explored by archaeologist Vladimir Ryabtsev, who established the bronze sculptures had been discovered on the edge of the right terrace of the small river Suyga. The archaeologist didn’t find any traces of an ancient monument; however, he found some ceramic fragments close to the location of the bronze idols, one of those fragments dating back to the early Iron Age. And, the history of Rybinsk anthropomorphs didn’t end there. A local found the fourth bronze figure in the same area, in an old dump, in 2000 (over 20 years later). Another archaeological survey didn’t yield any new results. Therefore, the question about the type of the monument (a place of cult or an early Iron Age burial site) remains unresolved.
The presented specimen is one of the three objects discovered in the 1970s. The discovery is an outstanding example of anthropomorphic repoussé works made by flat casting with the use of relief elements. The raw edge of the figure demonstrates a typical feature of the early Kulai repoussé reliefs, the so-called “openwork”. The figure is a front-view waist-up image of a man. The whole composition is resting on a massive sprue, visually perceived as a support base needed to place the casting vertically. The head represents a vertically stretched oval truncated at mid-forehead. The face contours are emphasized with a subtle bulge, symmetrical loop-shaped ears appearing from behind. The upper part of the head is crowned by a band divided into eleven sectors by vertical parallel lines. There is still no universally accepted interpretation of this element typical of Kulai anthropomorphs. In one of the versions, ancient craftsmen were trying to depict a protective cap (helmet?) with forehead metal plaques. In this case, the straight vertical nose shown as a perpendicular to the band and making the face look exceptionally serious may be interpreted as the nasal, while eye and mouth ovals may be the holes of the half-helmet. However, there is another version suggesting the band with vertical grooves on the forehead is not a headwear but a diadem. Such diadems have been found quite often in Kulai places of cult. Besides, similar metal diadems or headbands crowned the skulls of the dead bodies found on the few Kulai burial sites known to date.
The ancient craftsmen focused mostly on the head and spent much less time on the body. However, the hands are sculpted quite well, ending in the fingers squeezing some unidentifiable objects angles to the figure’s body.
The context of discovery and the composition of the collection allow the researchers to interpret Rybinsk discoveries as accessories of a farewell (purification) rite. In this case, the presented figure doesn’t simply picture a man—it pictures a dead man. This is mainly proved by the diadem associated with the ritual and mythological complex based on the ideas of Cosmos and the Underworld. Such rites revolved around destroying the evil (the death), which was most often embodied in anthropomorphic dolls. The latter would be burnt, drowned, buried, etc. 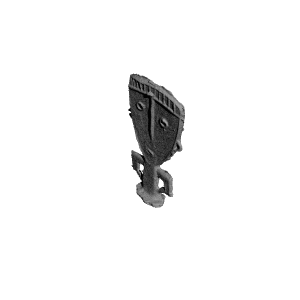 ×
0 collections where you can find Anthropomorphic figure by LiraArtefact