3D
Scan The World
1,910 views 57 downloads
1 collection
Community Prints Add your picture
Be the first to share a picture of this printed object
0 comments

The Museum of Siberian Archaeology and Ethnography at Tomsk State University maintains a unique collection of artifacts discovered during the construction of the Ob–Yenisei Canal in late 19th century. The collection includes 102 objects, which make part of the antiquities found during the construction, the rest being reserved by construction workers as souvenirs. Not only the composition (stone tools, bronze plaques, antler plates for coats of mail, a “shaman” crown, a Chinese coin, etc.), but also the geography of discoveries is stunning. The artifacts were found in the Ob–Yenisei interfluve, in upstreams of small tributaries of the canal system, away from the main waterways. Unfortunately, the academic records don’t specify the context of discovery for most artifacts or do it very approximately. The river Yazevaya turned out to be the richest source of antiquities, with objects discovered even in bottom sediments of the river bed.

The antiquities were submitted to the museum by different people. One of them, Baron Byork Aminov, supervised the canal construction works. It was him who enriched the university museum with the bronze anthropomorphic mask discovered in 1885—the “figure of the sun with a human face”. As it is known, the object was found in the upstream of the river Maly Kas, which is now the territory of Krasnoyarsk Krai. Unfortunately, this is all information about the context of discovery available to us. Today, we can only wonder whether it was a shaman, a distinguished warrior or a leader who possessed the plaque. It is not impossible that the plaque was manufactured specifically to be sacrificed to gods together with other “gifts” or by itself. In the latter case, it shouldn’t have circulated among the living too much. This version seems unlikely; however, first things first…

The first researcher to describe the discovery was Vasily Florinsky, sponsor of West-Siberian educational district. He defined the object as an “idol” or “solar deity”, and there were some obvious reasons for an interpretation like this. The plaque represents an image of a human head. The simplified face is shown by three relief ovals. The eyes and the mouth are carved clearly, while the nose is absolutely indiscernible. Rays of different size frame the outer contour of the head emphasized by a low-rise bulge. The rays look like triangles distributed around the perimeter. Most probably, these are elements of some specific headwear covering the whole head and hanging down the back. However, there are also other interpretations. An exotic version suggests that craftsmen of the Iron Age were trying to show the hairstyle and the beard of the character. Two symmetrical loops in the upper part served to suspend the plaque. The loops divide the rays into three groups: seven on the top and five on each side of the plaque.

The lower part of the head has a short rectangular pivot, which is interpreted differently. Some researchers see it as the neck, others suggest that it stands for the body, which was far not as important as the excessively large head. According to the latter version, upper and lower limbs are represented by symmetrical “appendix rays” on both sides of the pivot. Such appendices could have been used to attach masks to wooden spear shafts. In this case, the loops served to fasten some hanging accessories, like jingles or rattles.

Back in the Soviet time, the mask was thoroughly analyzed by academician Alexei Okladnikov, who referred it to East-Siberian-style bronze reliefs. There are some very similar castings depicting “crowned” and “sun-like” characters with complex headwear or triangle rays along the contours. In his opinion, such objects could have been used as “totem symbols” or emblems identifying tribal coalitions. 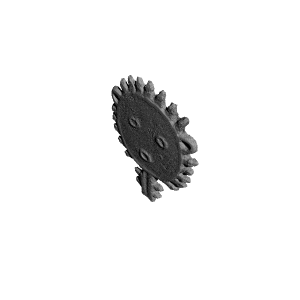 ×
1 collections where you can find Anthropomorphic mask by LiraArtefact