3D
6,879 views 490 downloads
3 collections
Community Prints Add your picture
Be the first to share a picture of this printed object
0 comments

I made this device quickly.
In the following planned to make changes.
But the device is already half a year, works well, decided not to change anything.
Bearing 608ZZ.
We print leisurely with good resolution and filling
It works great in conjunction with this thing https://www.myminifactory.com/object/30503

I print in ABS
ABS has a shrinkage.
In other materials bearing landing can be free.
Heavy landing bearing is not needed ..
If it is very bad, use a drop of glue (PLA) , a drop plastic dissolved in acetone (ABS)
No need to use super glue or glue with strong fixation

21-11-2016
I purchased and installed new screws.
Screws of high quality
I removed the anti wobble system and the upper bearing.
Print a test blocks before and after. (AVS label with anti wobble system and old of screws)
The printer prints with new screws bit cleaner, but small waves the axis Z visible. Even more strongly felt irregularities to the touch
Most likely I will go back to the previous configuration, but with the new screws
Result on the picture

19-12-2016
I added a photo of a similar device installed on my old 3D printer(PRUSA i2).
It is already working for 4 years.
This is the basis of my concept 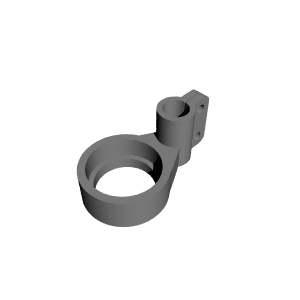