3D
Scan The World
2,017 views 172 downloads
3 collections
Community Prints Add your picture
Be the first to share a picture of this printed object
1 comments

Antinous was a youth of renowned beauty from Bithynia in north west Asia Minor (Turkey). He was the lover of the Emperor Hadrian and was deified (worshiped as a god) after drowning himself in the Nile in 130 AD.

This statue, one of many carved after his death, is based on a classical Greek prototype of the 5th century BC. It was restored in the late 18th century by the Roman sculptor Pierantoni, whose additions include the cup and the jug. He has thus interpreted Antinous allegorically as Ganymede offering ambrosia to Jupiter (or Hadrian).

This work was also purchased by Leverhulme at the sale of Thomas Hope’s collection. 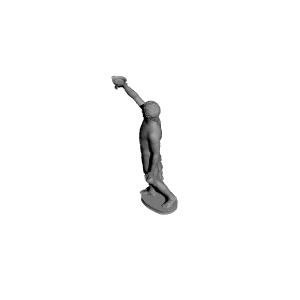 ×
3 collections where you can find Antinous by Scan The World