This is a replica of the famous Anubis Shrine. The original shrine was one part of the grave goods of Tutankhamun (18th Dynasty, New Kingdom). The tomb was discovered almost intact on 4 November 1922 in the Valley of the Kings in west Thebes by Howard Carter. Anubis is the Greek name of a god associated with mummification and the afterlife in ancient Egyptian religion, and he is portrayed completely in his jackal form. Between the god's front legs was an inscribed tablet with the name of Akhenaten's eldest daughter, Meritaten, and some of the details on the wooden sculpture were made out in gold and silver leaf, making it much more valuable. It is likely that the whole shrine was used in the funerary procession for the pharaoh and later placed in his tomb.

Both the original and the replica are exhibited in the Egyptian Museum of Antiquities in Cairo. 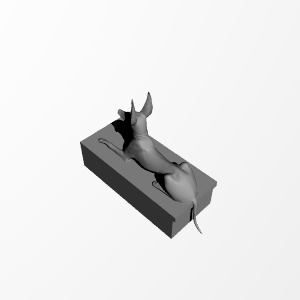 ×
64 collections where you can find Anubis Shrine by Scan The World
×
Blair Witch
@BlAiRwItCh
4
Printed on: Creality Ender 3
Material: PLA
Posted at: 27th May 2020

Beautiful scan. Tail is a problem. Careful with supports. Made with 3 different filaments.