THIS IS A REMIX OF A PART I FOUND ON THINGIVERSE

Like many people, I bought an Anycubic Mega Pro printer. The cable for the heat bed is routed towards the rear of the printer and is tied to the adjustment screw in back of the bed. While printing large prints, the cable will bump the adjustment wheel and raise the bed, causing the first layer to be too thin.

I found the original for this on thingiverse.com. It is thing number 3678489, designed by user R13D.  The original design is two pieces, requiring it to be glued together.  I don't like to glue things, so I remixed it to mount under the Y carriage plate instead of on top. The bracket fits snugly into the cutout, and can be installed without taking anything apart.

To install, simply snap the bracket into place Under the Y carriage plate.  Then carefully poke the two eight inch zip ties upthrough the bottom and fish the ends out using long nose pliers. Pull the ends out and push them down through the lock on the zip ties.  Trim off the tag ends and then unclip the cable from the adjusting screw on the hot bed.

Carefully thread the four inch zip ties through the bracket extension, from front to back, so both ends of the zip ties face the rear of the machine.  Position the cable and pull the ties tight. Trim off the tag ends.

After re-levelling the bed, you will be ready to print again.

This can be printed without supports, and should lay flat on the build plate. 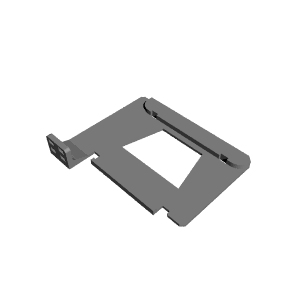