This vase was designed as a last minute entry for the SelfCAD for the MyMiniFactory SelfCAD Design Competition! Took me about two days from start to finish to design, print, and airbrush the vase.

After generating the texture on the surface, I had copied the plane 3 times and rotated 60 degrees to create an equilateral triangle. After stretching and scaling the vase, I had tapered and twisted the vase. After the final form was complete I had added a base to the vase and merged all the components together so that it was ready to be 3d printed.

This model requires no support material when 3d printed.

After 3d printing I had airbrushed the blue/turquise color onto the vase to give it a finished look.

After airbrushing the vase blue and adding the flowers the vase really starts to have a tropical feel to it!

Check out the video I took while modeling the vase using SelfCAD by following the link: https://youtu.be/JLglVH1FYnQ 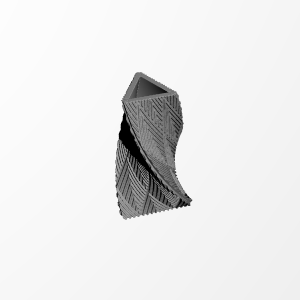 ×
4 collections where you can find Apex Vase by areynolds15