The Colonna Venus is a Roman marble copy of the lost Aphrodite of Cnidus by Praxiteles, conserved in the Museo Pio-Clementino as a part of the Vatican Museums' collections. It is now the best-known and perhaps most faithful Roman copy of Praxiteles' original.

The Colonna Venus is one of four marble Venuses presented in 1783 to Pope Pius VI by Don Filippo Giuseppe Colonna (1760-1818); this, the best of them, was published in Ennio Quirino Visconti's catalogue of the Museo Pio-Clementino, where it was identified for the first time as a copy of the Cnidian Venus. Immediately it eclipsed the somewhat flaccid variant of the same model that, as the Belvedere Venus, had long been in the Vatican collections. During the 19th and early 20th centuries, a prudish tin drape was modestly wrapped around the legs of the Colonna statue - this was removed in 1932, when the statue was removed to the Gabinetto delle Maschere where it may be seen today. 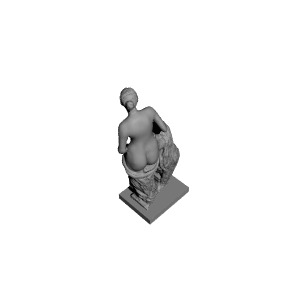 ×
3 collections where you can find Aphrodite by Scan The World
×
Angel Spy
@Angel Spy
4
Printed on: Prusa i3 MK2 Kit
Material: PLA
Posted at: 17th October 2021

she looks way better than photos, like made with marble or something. nicely scanned object.