Aphrodite Doria-Pamphili at The Louvre, Paris

3D
Scan The World
3,387 views 169 downloads
Community Prints Add your picture
Be the first to share a picture of this printed object
0 comments

Aphrodite Doria-Pamphili at The Louvre, Paris

This statue of Aphrodite is one of the finest copies of a classical sculpture dating from the last years of the 5th century BC. This type of statue owes its name to the most complete surviving example, now in the Doria Pamphili Palace in Rome. The question of the attribution of the original is still open. Some experts believe the statue to be a copy of the Aphrodite Urania by Phidias, while others identify it as a work by his contemporary Agorakritos of Paros.

A copy of an original dating from the classical era

In 1996 the Louvre purchased a remarkable marble statue that formerly stood in the grounds of Ombreval, the property of Stéphane Dervillé in Domont, Val d'Oise, near Paris. The work was produced using the acrolithic technique, the extremities-the head, nude right shoulder, arms, and feet-having been sculpted separately and added later, although the whole work is in marble. This effigy of Aphrodite is one of a series of copies of a Greek work dating from the classical era-more precisely, the last decades of the 5th century BC. The most complete example, now in the Doria-Pamphili Palace in Rome, has given its name to this style of statue in general. Works by the classical sculptor Polykleitos inspired the contrapposto position, which he invented in the mid-5th century BC. This position is defined by an asymmetrical pose, with the shoulders turned in the opposite direction to the hips, and with one leg slightly forward so that the weight of the body is on the other leg.

Identifying the sculptor: Phidias or Agorakritos?

The question of the sculptor's identity has given rise to much debate. The treatment of the drapery and the nude shoulder-a motif often used by sculptors to denote the sensuality of the goddess of love-would seem to link this Aphrodite to the semi-reclining Aphrodite on the eastern pediment of the Parthenon. The original on which this work is based is thus sometimes attributed to Phidias, who directed work on the architectural decor of the Parthenon between 447 and 432 BC. In this case, the original is identified as the Aphrodite Urania (the Heavenly Aphrodite) in Elis, described by Pausanias in the Periegesis (6.25.1), or the Aphrodite on the Agora in Athens (1.14.7). However, this attribution poses a number of difficulties. Some of the effects of the drapery go beyond the aesthetic canon of the Parthenon and are closer to works from the end of the 5th century BC. Likewise, none of the Doria-Pamphili-style copies includes the tortoise on which the Aphrodite Urania in Elis was resting a foot. The sculpture is therefore more likely to be the work of Agorakritos of Paros, a student of Phidias who also worked on the Parthenon. He probably completed this statue in about 420 BC. The stylistic similarities between this copy and what we know of Agorakritos' major work, the Nemesis of Rhamnus, would seem to confirm this hypothesis.

The sculptor responsible for the Aphrodite now in the Louvre has produced a virtuoso rendering of the richness and diversity of the folds of the goddess's garment, carving the marble in a style typical of sculptors working in the late 5th century BC. The goddess is wearing a thin, short-sleeved tunic, known as a chiton, and a mantle of thicker fabric, a himation. The wind is playing with the cloth of her garments, molding it to the goddess's body in places and filling it out in others. The artist has succeeded in imitating the mannerist effects of the drapes, which seem to twist and writhe in places, while elsewhere they imitate the wet cloth effect, clinging revealingly to the nude body of the goddess, whose feminine attributes are apparent under the thin material. 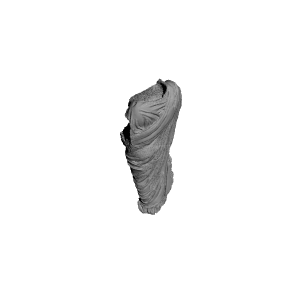 ×
0 collections where you can find Aphrodite Doria-Pamphili at The Louvre, Paris by Scan The World