Aphrodite Leaning against a Pillar at The Louvre, Paris

Aphrodite Leaning against a Pillar at The Louvre, Paris

Initially identified as Thalia, the muse of comedy, the statue was then taken for Euterpe, the muse of flute-playing, in the nineteenth century, before being identified as an ancient replica of an Aphrodite leaning against a pillar (probably Alcamenes' Aphrodite of the Gardens, sculpted at the end of the fifth century BC). The pose of the goddess, the handling of the drapery, and the openly sensual treatment of the female body are "mannerist" in style.

Formerly in the collection of Louis XIV, this statue has been subject to many interpretations over the centuries. It was first of all identified as a muse, because of the crow and the bay (or olive) branch carved in low-relief on the pillar, two symbols of the god Apollo, protector of the Muses. Some thought they recognized Thalia, muse of comedy, and imagined the young woman holding a grimacing mask in her right hand. In the nineteenth century, the statue was believed to represent Euterpe, muse of flute-playing, whose attribute is a double flute. It was only later in the same century that the work was identified as a classical replica of an Aphrodite leaning against a pillar, comparable to the decoration found on certain late fifth-century BC bronze reliefs (in particular, a plaque decorating a lamp-holder in the collection of the National Museum in Athens); this time, there could be no doubt about the identity of the figure, who is associated with Eros.

The statue is very likely to be a reproduction of the famous Aphrodite of the Gardens made at the end of the fifth century BC by the Athenian sculptor Alcamenes, a contemporary of Phidias, and a follower and emulator of the latter. The original, described by Pausanias (Guide to Greece I, 19, 2), was in Athens. Wearing a chiton and a robe covering only the lower part of her body, the goddess leans on a pillar or a tree trunk with a distinct slouching of the hips, emphasized by the left leg crossed over the right. According to the replica in Naples and bronze reliefs, the head will have been veiled. Attribution to Alcamenes is based above all on the pose of the figure and the handling of the drapery, reminiscent of the sculptures in the temple of Athena Nike and of certain caryatids of the Erechtheum, two buildings on the Acropolis in Athens where the master probably worked on the decoration. This statuary type is also seen in a relief in the Louvre that reproduces the base of the statues for the temple of Hephaestus in Athens, made by the sculptor circa 420 BC.

This piece is firmly in the "mannerist" style that developed from 430 BC onward. The unstable pose, that makes a support for the figure necessary, was one of the novelties introduced at the end of the fifth century. The treatment of the drapery foreshadows the transparency effects of the 'wet drapery' style and reveals the female form; the naked body lies just beneath the surface of the fabric and is highlighted by a rich play of folds with symmetrical curves tracing an almond shape around the belly and others highlighting the curve of the thighs. The garment has slipped away slightly to reveal the left shoulder, a motif inspired by the goddesses depicted in the Parthenon frieze and eastern pediment.

This object is part of "Scan The World". Scan the World is a non-profit initiative introduced by MyMiniFactory, through which we are creating a digital archive of fully 3D printable sculptures, artworks and landmarks from across the globe for the public to access for free. Scan the World is an open source, community effort, if you have interesting items around you and would like to contribute, email stw@myminifactory.com to find out how you can hel 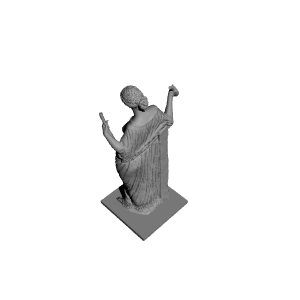 ×
1 collections where you can find Aphrodite Leaning against a Pillar at The Louvre, Paris by Scan The World
×
Louise Krasniewicz
@LouiseK
0
Printed on: MakerBot Replicator 2
Material: PLA
Posted at: 17th October 2021