Aphrodite Wringing out her hair

3D
Scan The World
2,888 views 264 downloads
Community Prints Add your picture
Be the first to share a picture of this printed object
0 comments

Aphrodite Wringing out her hair

Nude and seminude images of the goddess Aphrodite first became popular in the mid-4th century BC. They often seem to depict the goddess in the act of bathing—and of being surprised at her bath—but they are also associated with her mythical birth from the sea. One of the most famous such images in antiquity was a painting by the Greek artist Apelles, known as the Aphrodite Anadyomene (Aphrodite Rising from the Sea). An ancient description of the painting says that it shows how the goddess “grasping her dripping hair with her hand,… wrings the foam from the wet locks” (The Greek Anthology V, trans. W. R. Paton [Cambridge, MA 1918] 16.178). Numerous small statuettes and reliefs of a standing or crouching Aphrodite holding her hair are thought to have been indirectly inspired by this painting.

Aphrodite (Greek: (Afrodíti)) is the Greek goddess of love, beauty, pleasure, and procreation. She is identified with the planet Venus, and her Roman equivalent is the goddess Venus. 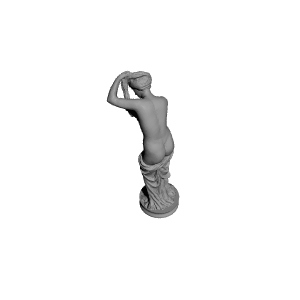