3D
360°
Featured Scan The World
3,794 views 452 downloads
6 collections
Community Prints Add your picture
Be the first to share a picture of this printed object
0 comments

Dating from around 1530, Apollo (also known as Apollo-David, David-Apollo, or Apollino) is a 1.46 metre marble sculpture by the Renaissance master Michelangelo.

The sculpture is unfinished, which serves as the primary reason for the uncertainty regarding its subject and intended final form.

In 1530, Florence was recovering from a nine-month siege during the War of the League of Cognac. This resulted in the defeat of the Republic of Florence and the imposition of Imperial Spanish rule.

Pope Clement VII imposed as governor the notoriously tough Baccio Valori, and it was he who had the Apollo sculpture commissioned. His intent was for it to stand in his private palace, but work on it came to a halt with the arrival of Alessandro de' Medici as Duke of Florence, since Michaelangelo himself left the city at this time. Having fled to Rome to escape the Medici, he never returned to Florence and so never resumed work on the piece.

The statue depicts a nude man, with complex use of contours and twisting allowing multiple aspects of the body to be visible from a single angle. The left arm and right leg are both bent, with counterpoints in the right arm and left leg, which are both extended.

The right foot is placed on an unfinished section, which may have been intended as the head of the giant Goliath if Michaelangelo did indeed have David in mind when he began work on the piece. A tree behind the man acts as a static support, contrasting with the dynamism of the figure's twisted body and complex patterns.

If this is indeed David rather than Apollo, it shows a significant contrast with Michaelangelo's own world-famous David statue from the Piazza della Signoria is the emotional weight that appears on the figure's head.

Far from exulting at the defeat of his giant enemy – if indeed the unfinished mound does depict Goliath – he appears downcast, as though feeling remorse for the brutal way in which he had beaten him. Others, however, suspect a more contemporary reason: that Michaelangelo was using the Apollo statue as a way to express his contempt for those who had conquered his home city.

Some scholars doubt that this statue was created by Michaelangelo at all, given that the artist himself made no known notes about it. Sources from the period are in disagreement about its meaning: the 1553 inventory produced by Duke Cosimo I identifies the figure as David, but Vasari states that it is Apollo.

The unfinished state of the statue's reverse means that it cannot be determined with any certainty whether the man is drawing an arrow from a quiver – which would suggest Apollo – or whether he is getting hold of a sling, as David would have done. The body is heavy-set, supporting the Apollo theory, but there is no obvious place for his bow to have been added.

All this has led to the common use by art historians and critics of dual titles: "David-Apollo" or "Apollo-David" for the sculpture. A number have suggested that the work had been started several years earlier as David, then put aside and only later continued as Apollo. Valentinier in 1958 even put forward the idea that rather than being Michaelangelo's work, the statue was Roman artist Jacopo Galli's lost "Apollo Cupid", dating from the late 1530s. This origin for the sculpture, however, has not been widely accepted.

Apollo was acquired by Duke Cosimo I for his own collection in the 16th century, and it was then displayed in his private apartments, along with several other prominent pieces of Renaissance sculpture, including Michaelangelo's own Bacchus. Later, Apollo was moved to a niche in the Boboli Gardens, where it stayed until 1824. It spent about 40 years at the Uffizi, but has been displayed in the Renaissance Wing of the Bargello Museum in Florence since that establishment opened in 1865. 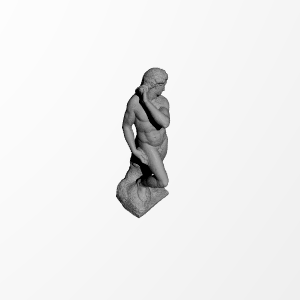