3D
Scan The World
1,294 views 53 downloads
1 collection
Community Prints Add your picture
Be the first to share a picture of this printed object
0 comments

Apollo is in many respects the paradigm of a Greek god. He represents order, harmony, and civilization in a way that most other Olympian deities cannot quite equal. One only has to compare him with Dionysos to understand how Apollo is depicted as a bright, rational counterpart to the chaotic and frenzied god of wine and women. Indeed, Apollo is most often associated with the cultivated arts of music and medicine, and his role as the leader of the Muses establishes him as a patron of intellectual pursuits.

Therefore, it comes as no surprise that in art, images of Apollo represented the height of male attractiveness - indeed, for years, Archaic statues of youths were commonly referred to as "Apollo", later to be replaced the more accurate term "kouros" (young man). However, as with most Greek deities, Apollo has characteristics that are myriad and diverse, so we should proceed to an exploration of this important god.

Displayed at the Antike am Königsplatz in Munich. The museum displays Bavaria's collections of antiquities from Greece, Etruria and Rome. The sculpture collection, on the other hand, is located in the opposite Glyptothek and works created in Bavaria are on display in a separate museum. Ancient Egypt also has its own museum. 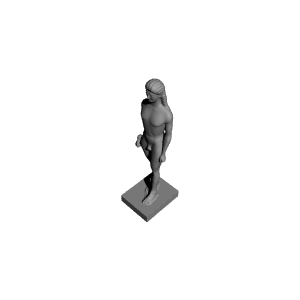 ×
1 collections where you can find Apollo by Scan The World