3D
Scan The World
1,705 views 176 downloads
3 collections
Community Prints Add your picture
Be the first to share a picture of this printed object
0 comments

This Statues depict Apollo and Daphne  and it was made around 1720, by Giovanni Stanetti. The sculpture is located in the garden of Belvedere, Vienna.

The figures are have been inspired by the famous Greek mythology. Apollo would mock Cupid for the use of his arch and arrows as he considered himself a great warrior patron of archery. Eros decided to punish him. He threw a golden arrow at him and a lead arrow at Daphne.
This turned into Apollo being madly in love with the beautiful nymph Daphne who on the contrary did not love him back.

One day Daphne, tired of being persecuted by Apollo’s love, decides to seek help on earth. She asked her father Peneus to save her from this impossible love and to trap her on earth so that Apollo could not reach her.

He accepted to help her and indeed transformed his beautiful daughter into a laurel tree. From then on, Apollo decided to carry laurel with him to honour his loved one forever. 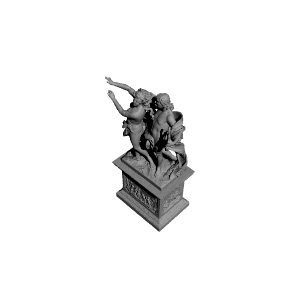