Apollo and Daphne at the Galleria Borghese, Rome

Apollo and Daphne at the Galleria Borghese, Rome

Apollo and Daphne is a life-sized Baroque marble sculpture by Italian artist Gian Lorenzo Bernini, executed between 1622 and 1625. Housed in the Galleria Borghese in Rome, the work depicts the climax of the story of Daphne and Phoebus in Ovid's Metamorphoses.

The sculpture was the last of a number of artworks commissioned by Cardinal Scipione Borghese, early on in Bernini's career. Apollo and Daphne was commissioned after Borghese had given an earlier work of his patronage, Bernini's Pluto and Persephone, to Cardinal Ludovico Ludovisi.

Much of the early work was done in 1622–1623, but a pause, quite possibly to work on the sculpture of David, interrupted its completion, and Bernini did not finish the work until 1625. Indeed, the sculpture itself was not moved to the Cardinal's Villa Borghese until September 1625. Bernini did not execute the sculpture by himself; he had significant help from a member of his workshop, Giuliano Finelli, who undertook the sculpture of the details that show Daphne's conversion from human to tree, such as the bark and branches, as well as her windswept hair. Some historians, however, discount the importance of Finelli's contribution.

While the sculpture may be appreciated from multiple angles, Bernini planned for it to be viewed side on, allowing the observer to see the reactions of Apollo and Daphne simultaneously, thus understanding the narrative of the story in a single instant, without the need to move position.

When Phoebus (Apollo), fated by Cupid's love-exciting arrow, sees the maiden daughter of Peneus a river god, he is filled with wonder at her beauty and consumed by desire. But Daphne has been fated by Cupid's love-repelling arrow and denies the love of men. As the Nymph flees he relentlessly chases her—boasting, pleading, and promising everything. When her strength is finally spent she prays to her father Peneus:

'Destroy the beauty that has injured me, or change the body that destroys my life.' Before her prayer was ended, torpor seized on all her body, and a thin bark closed around her gentle bosom, and her hair became as moving leaves; her arms were changed to waving branches, and her active feet as clinging roots were fastened to the ground—her face was hidden with encircling leaves.

Phoebus loved the graceful tree, clung to it and kissed the wood:

'But since thou canst not be my spouse surely thou shalt be my tree. Thee O laurel my hair, thee my lyres, thee my quivers shall always have ... And as my head is youthful with unshorn locks, do thou likewise wear always evergreen honours of foliage. The laurel nodded assent with its branches lately made'

Best to be printed larger to ensure all fine details of the leaves are picked up! This is a very difficult print, if you print it send in your photographs of it! 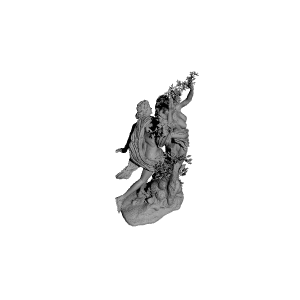 ×
49 collections where you can find Apollo and Daphne at the Galleria Borghese, Rome by Scan The World
×
Carlos García
@Carlosgardia
5
Printed on: Creality Ender 3
Material: PLA
Posted at: 13th February 2019

I tried my best... Really difficult print ! There are no leaves.. Height 165mm, resolution 0.2. Printed in two days (you can see where I paused the print). But I'm very happy with the result so far !

The height is about 11 cm. The top leaves are missing, but I still like it. Now I'm looking forward to the model of Pluto and Proserpina :)

This version around 220mm high Print time: 11 hrs 56 min Manual removal of support scaffold: 3 hrs (All together a lot less time than the original!)