Apollo at The Bargello Museum, Florence

3D
Scan The World
5,486 views 330 downloads
4 collections
Community Prints Add your picture
Be the first to share a picture of this printed object
0 comments

Apollo at The Bargello Museum, Florence

The graceful figure of a youth in a twisting pose is mysterious in both mood and subject; the elements that would confirm an identity as either the biblical giant-killer David or the pagan sun-god Apollo were never completed. With flesh areas covered by a fine network of chisel marks, the statue is a fascinating example of the non-finito, the unfinished condition that allows viewers to study the scullptural process in many works by Michelangelo. This statue was displayed t the Gallery once before, in 1949, to celebrate Italian-American friendship at the time of President Harry Truman's inauguration. 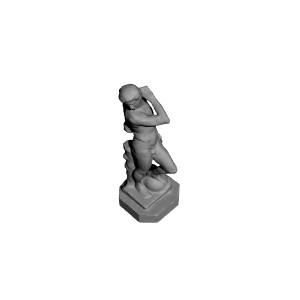 ×
4 collections where you can find Apollo at The Bargello Museum, Florence by Scan The World