3D
Scan The World
1,600 views 80 downloads
2 collections
Community Prints Add your picture
Be the first to share a picture of this printed object
0 comments

This statue depicts a kouros (a young nude male), of a size slightly superior to the truth. The lower part of the legs is not preserved. The face presents the typical features of the archaic Greek sculpture: large elongated eyes with engraved pupils, lips with an "archaic smile", which does not, however, express a state of mind, but is the attempt to render three-dimensionality. The hairstyle is extremely accurate: it has two rows of curls overlapping on the forehead, while on the shoulders there are ten wavy locks; in addition, he wears a tiara that once had to be golden. It has broad shoulders, wide chest, but rather a narrow waist, very common characteristic in the male statues of archaic age; the musculature of the abdomen is outlined by neat grooves, while shoulders and pectorals are softer 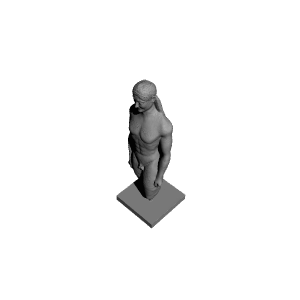