3D
360°
2,256 views 196 downloads
3 collections
Community Prints Add your picture
Be the first to share a picture of this printed object
0 comments

This model was created by MiniWorld 3D founder Dany Sánchez.

The Santa Catalina Arch is one of the distinguishable landmarks in Antigua Guatemala, a UNESCO World Heritage city that used to be the capital of Guatemala. Built in the 17th century, it originally connected the Santa Catalina convent to the church, allowing the cloistered nuns to pass from one building to the other without going out on the street or being seen. After the earthquakes of 1773, the city was in ruin and the capital relocated to what is now modern Guatemala City. The arch and many buildings laid abanadoned until the late 1800's, when it was renovated and the clock was added on top (from Wikipedia).

MiniWorld 3D is excited to bring this historical model to life as a homage to all the people of Guatemala. This model was designed from scratch, no scans or repurposed models, so it's pristine clean for 3D printing! Please give credit, it's all about spreading culture and education!

No supports, rafts or brims needed.

If you want, you can add supports under the arch for a cleaner, smoother finish, but it prints fine without them.

Scale up or use resin to get the full details such as the cross at the top. 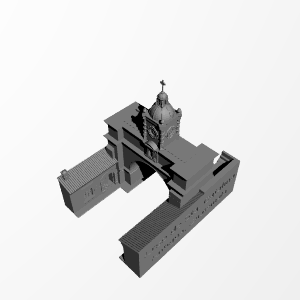 ×
3 collections where you can find Arco de Santa Catalina - Antigua, Guatemala by MiniWorld