3D
Scan The World
1,728 views 72 downloads
Community Prints Add your picture
Be the first to share a picture of this printed object
0 comments

The head is of slightly rosy white marble, delicate work; the red marble bust. The crown, formed of leaves and clusters of ivy, clearly characterizes this figure. (Rachou, 1912).

According to Du Mege, this beautiful head was also discovered in Martres and placed with Bacchic heads which is the object of the previous notice, in the episcopal palace of Rieux. The corresponding torso was found and transported around 1860 in the cabinet of Victor de Frézalz, advisor to the Parliament of Toulouse, also a connoisseur and collector of antiquities. (D. C. in Toulouse and antiquity found in the eighteenth century, page 22).

Head of Ariadne, Bacchante or Bacchus.
The head is cut at the level of the neck, the nose is broken, the hair separated by a median line consists of fine corrugated wicks brought backwards. It is crowned with ivy and small bunches of grapes. The ears are partially visible. A curl of hair is visible on each temple. The features are fine and delicate. The eyes are small and the pupils are smooth. The arcades are suggested. The mouth is slightly open. Souad MEKRABECH, March 2012. 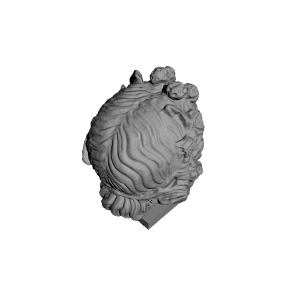