3D
Scan The World
2,656 views 77 downloads
Community Prints Add your picture
Be the first to share a picture of this printed object
0 comments

Aríbalo excavated by Grete Mostny in the La Reina cemetery in 1947. This type of vessel was carried on the back and contained chicha for ceremonial purposes. Its base is flat, unlike the Cuzqueño aríbalos with a pointed base and its decoration reflects local styles. The Inca empire extended from the south of Colombia to Central Chile, where our current national territory was part of the province of "Collasuyu". 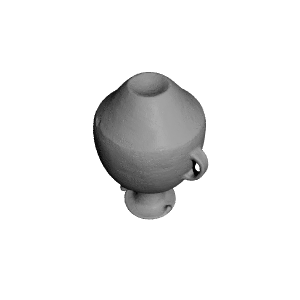