Aristaeus and Proteus at The Palace of Versailles, France

3D
Scan The World
2,657 views 246 downloads
Add to collection
5 0
Community Prints Add your picture
Be the first to share a picture of this printed object
0 comments

Aristaeus and Proteus at The Palace of Versailles, France

The subject of this group is taken from Virgil's Georgics. Aristaeus was a shepherd, son of Apollo and the nymph Cyrene, and he kept bees. He pursued the nymph Eurydice who was killed by a serpent which she disturbed when fleeing from him. In revenge, her companion Nymphs killed Aristaeus' bees. His mother advised him to ask Proteus, guardian of the sea-monsters, for advice as Proteus could foretell the future. But Proteus was elusive, frequently changing his appearance or disappearing, so he had to be tied down. It is this dramatic moment which is depicted here: Aristaeus is securing the struggling Proteus, who is accompanied by two seals. The dynamic pose of the bee-keeper is perhaps inspired by the figures of youths in the monumental ancient marble group of the Farnese Bull (Museo Archeologico Nazionale, Naples), that was coveted by the French king, Louis XIV.

This group originated in a commission to Sebastien Slodtz, first mentioned in 1688, for a large-scale marble group of this subject for a prominent location along the central axis of the garden at Versailles. Slodtz's master, the better-known sculptor François Girardon, worked out the design which survives in a pen and wash drawing by him. Girardon exhibited a bronze of this subject at the Salon of 1704, and it is shown as being on display in engravings of his studio. It is believed that the V&A bronze was the one in these records, owned by Girardon. The composition marked a shift in sculpture at Versailles from the series of standing allegorical figures, to groups where there was movement and often drama and narrative content. A plaster cast of the full-size model was set up in the garden in 1705 but the marble was not installed there until 1723.

Sébastien Slodtz was born in Antwerp, the son of Jacqueline de Lannoy and a master carpenter. He settled in Paris, where he entered the study of François, and through marriage became the son-in-law to king Louis XIV’s gold- and silversmith, Domenico Cucci, and brother-in-law to the sculptor François Chauveau (1613-1676). Slodtz worked on a number of commissions for Louis XIV, many of which survive in Paris and at Versailles. He lived at the Louvre from 1699 until his death, and three of his sons became sculptors. 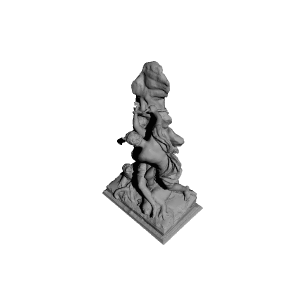 ×
0 collections where you can find Aristaeus and Proteus at The Palace of Versailles, France by Scan The World