Aristotle at The Louvre, Paris

3D
Scan The World
3,274 views 314 downloads
3 collections
Community Prints Add your picture
Be the first to share a picture of this printed object
0 comments

Aristotle at The Louvre, Paris

We can recognise here the traits of Aristotle (384-322 AD), tutor of Alexander the Great between 342-341 BC. and the founder of the School of Philosophy, which he opened around 335 BC in Athens. His portrait is identifiable thansk to another replica, signed with his name, which is now lost but a drawing of it. All of these replcates are reproduced from an original bronze which is now lost, attributed to Lysippos, the sculptor for Alexander the Great. The nose is a restoration. Traces of polychrome can be found in the hair and the beard.

Made some supports for this print. 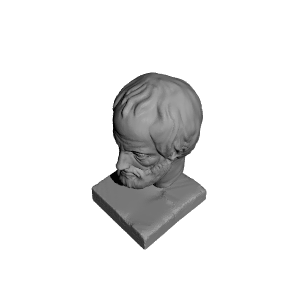 ×
3 collections where you can find Aristotle at The Louvre, Paris by Scan The World