3D
360°
Featured Scan The World
8,443 views 956 downloads
17 collections
Community Prints Add your picture
Be the first to share a picture of this printed object
2 comments

One of the most mysterious objects in the Royal Armouries' collection is the 'horned helmet'. This bizarre headpiece was commissioned in 1511 by he Holy Roman Emperor Maximilian I as a gift for the young King Henry VIII. The helmet would have been part of a full armour, worn by King Henry for court pageants.

Research to identify the source that inspired the horned helmet is continuing, but the copper alloy (possibly originally gilded) spectacles were never fitted with lenses, which reveals some clues as to its signification. It is believed that the spectacles form part of the identity of a ‘fool’, a figure commonly found in late 15th- and early 16th-century imagery, suggesting that everyone, however noble or lowly, has elements of foolishness in their character.

A number of images of fools wearing or carrying spectacles of this kind exist. The spectacles themselves are of so-called ‘rivet’ type, an almost universal design which hinged in order that they might grip the bridge of the wearer’s nose. Spectacles of this type are known in Europe from at least the middle of the 14th century.

Following Henry’s death in 1547, it was probably placed on display among other arms and armour belonging to him. The rest of the armour was apparently discarded as scrap metal after the Civil War. The extraordinary appearance of the helmet probably saved it from destruction and it remains one of the most enigmatic pieces in the collection to this day. 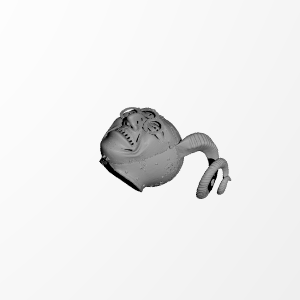