3D
360°
1,353 views 28 downloads
Community Prints Add your picture
Be the first to share a picture of this printed object
0 comments

The Constitutionalist Revolution of 1932 (sometimes also referred to as Paulista War or Brazilian Civil War[1]) is the name given to the uprising of the population of the Brazilian state of São Paulo against the 1930 coup d'état when Getúlio Vargas forcibly assumed the nation's Presidency; Vargas was supported by the military and the political elites of Minas Gerais, Rio Grande do Sul and Paraíba. The movement grew out of local resentment from the fact that Vargas ruled by decree, unbound by a Constitution, in a provisional government. The 1930 coup also affected São Paulo by eroding the autonomy that states enjoyed during the term of the 1891 Constitution and preventing the inauguration of the governor of São Paulo Júlio Prestes in the Presidency of the Republic, while simultaneously overthrowing President Washington Luís, who was governor of São Paulo from 1920 to 1924. These events marked the end of the First Republic. Vargas appointed a northeasterner as governor of São Paulo.

This armoured boat was designed and builded by Students from Politechinic Institute (São Paulo) The picture shows the boat in Testing in Tiete River. Two boats were builded in conflict : MF-11 and MF-12 models.

If you want to find out more about the revolt: https://en.wikipedia.org/wiki/Constitutionalist_Revolution

Please support our work buying our 3d printing minis in: 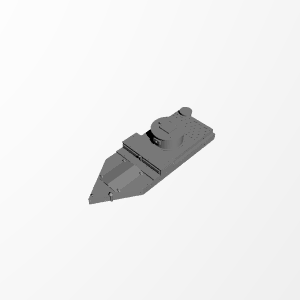