Arria and Paetus at The Louvre, Paris

3D
Scan The World
5,447 views 732 downloads
3 collections
Community Prints Add your picture
Be the first to share a picture of this printed object
0 comments

Arria and Paetus at The Louvre, Paris

Arria, the wife of Paetus, who was condemned to death by the emperor Claudius, stabbed herself then passed the dagger to her husband, saying: "Paete, non dolet" ("Paetus, it does not hurt"). This subject is characteristic of the "examples of virtue" that constituted an aspect of the historical genre.

The Roman senator Caecina Paetus was condemned to death for his involvement in a conspiracy against the Emperor Claudius in AD 42. In order to give him courage, his wife Arria first stabbed herself, then passed the dagger to Paetus saying "Paete, non dolet" ("Paetus, it does not hurt"). There were very few representations of this famous act, recounted by the Latin authors Pliny the Younger (c. AD 61-c. AD 114), Martial (c. AD 40-c. AD 104), Tacitus (c. AD 55-c. AD 120), and Dio Cassius (c. AD 155-c. AD 235); consequently, as of the 18th century, the group was often interpreted as the suicide of Lucretia in the arms of her husband Collatinus.
The model was made by Jean-Baptiste Théodon, a French sculptor who worked for many years in Rome; he began to sculpt the marble in 1685. In January 1691, La Tuelière (director of the French Academy in Rome), considering Théodon's progress too slow, entrusted the task to Pierre Lepautre. The date inscribed on the marble (1691) is the year when Lepautre began the work, which he completed in 1695. The sculpture was transported to France in 1715, and installed at the Château de Marly before being moved to the Tuileries Gardens in 1717, as a matching piece for Lepautre's Aeneas and Anchises (in the Louvre). It entered the Louvre in March 1989.

This work was clearly not inspired by the famous antique group in the Ludovisi collection (Museo delle Terme, Rome), which was known as Paetus and Arria from 1670. In 1684, François Lespingola made a marble copy (at Versailles) of that antique sculpture (visible in Rome, and reproduced in the collections of engravings by Perrier and Audran) for Louis XIV. However, Théodon and Lepautre's work bears stylistic similarities to Roman 17th-century sculpture. The figure of Arria was no doubt inspired by Ercole Ferrata's Saint Agnes (1660, Sant'Agnese, Rome); Paetus resembles a figure in Algardi's The Meeting of Attila and Pope Leo (1646-63, Saint Peter's, Rome). The fullness of the figures and drapery resembles that of Roman statuary. The loose folds of Arria's feminine robe contrast with the wide, smooth pleats of the senator's tunic.

The artist attempted to convey the meaning of the heroic words that Arria seems to be murmuring here, by portraying her death as painless. Serene in the conviction that her noble sacrifice is not in vain, eyes clouding over, knees giving way, she points to the wound above her left breast, proffering the dagger to her husband with her other hand. The noble figure of Paetus leans tenderly toward her. His clothes are finely detailed: (tunic with mantling, chlamys fastened with a fibula, buskins). The servant is beautifully portrayed, with a remarkable play of drapery, as she supports her mistress and looks sadly up at her face. The tasseled cushion has a lovely finish (although the artist did not indicate the impression made by the servant's foot). A winged cupid with a sorrowful expression, sitting astride a dog (symbols of the couple's love and fidelity), is lifting a fold of Paetus' cloak, perhaps to hide from the tragic scene. 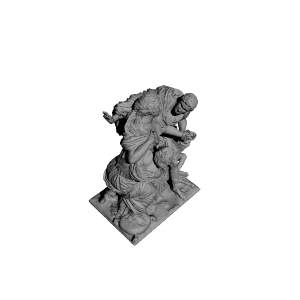 ×
3 collections where you can find Arria and Paetus at The Louvre, Paris by Scan The World