3D
Scan The World
1,415 views 111 downloads
1 collection
Community Prints Add your picture
Be the first to share a picture of this printed object
0 comments

The Arrotino (Italian - the "Blade-Sharpener"), or formerly the Scythian, thought to be a figure from a group representing the Flaying of Marsyas is a Hellenistic-Roman sculpture (Pergamene school) of a man crouching to sharpen a knife on a whetstone.

The sculpture was excavated in the early sixteenth century, for it is recognizable in an inventory made after the death of Agostino Chigi (1520) of his villa in Trastevere, which would become the Villa Farnesina. Later the sculpture formed part of the garden of sculptures and antiquities that Paolantonio Soderini inherited from his brother, Monsignor Francesco Soderini, who had arranged them in the Mausoleum of Augustus; Paolantonio noted in a letter of 1561 that il mio villano— "my peasant"— had gone away, and it is known that a member of the Mignanelli family sold the Arrotino to Cardinal Ferdinando de' Medici. It was removed to the Villa Medici, where it was displayed until it was removed in the eighteenth century to the Medici collections in Florence. 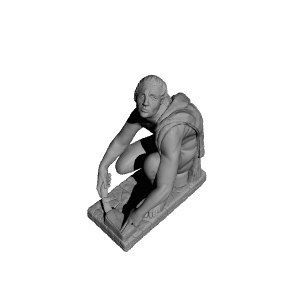 ×
1 collections where you can find Arrontino by Scan The World