3D
Scan The World
5,994 views 380 downloads
5 collections
Community Prints Add your picture
Be the first to share a picture of this printed object
0 comments

This is a bronze statue of Artemis and a deer. Either Greek or Roman, the sculpture is from the Late Hellenistic or Early Imperial era ca. 1st century B.C.-1st century A.D.

Artemis, known to the Romans as Diana, stands with her weight on her right leg, her left foot trailing. She wears a short chiton, appropriate to her role as a goddess of the hunt, a hinely wrought diadem embellished with silder, and elaborate sandals. Originally, she would have held a bow in the left hand. In other statues of similar type, the goddess is striding, but here, she stands as if in an epiphany, an impression that is emphasized by the high classicizing style of the figure, with its wind-blown drapery and strong idealized features. A deer stands to her left, and there was another small figure on her right, possibly a dog.

The statue and its base were cast in several sections by means of the lost wax method, as was characteristic in antiquity, and those parts were then joined together with flow welds. The artist and his workshop maintained a particularly high level of craftsmanship. The statue is said to have been found in Rome near to the church of Saint John the Lateran, and it likely would have decorated a peristyle garden of one of the large ancient Roman villas or town houses in that area. The most important sanctuary of Diana for the ancient Romans was located at Aricia, some eleven miles outside Rome, on the shore of Lake Nemi. That lake was known as the speculum Dianae (mirror of Diana).

This object is part of "Scan The World". Scan the World is a non-profit initiative introduced by MyMiniFactory, through which we are creating a digital archive of fully 3D printable sculptures, artworks and landmarks from across the globe for the public to access for free. Scan the World is an open source, community effort, if you have interesting items around you and would like to contribute, email [email protected] to find out how you can help 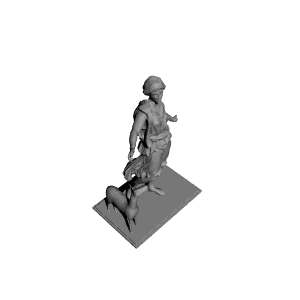