3D
Scan The World
2,542 views 52 downloads
Community Prints Add your picture
Be the first to share a picture of this printed object
0 comments

This is one of the earliest known korai (or statues of women) of the daedalic, archaic type. Discovered amonst many others by Théophile Homolle whilst excavating the sanctuary of Artemis in 1878. The sculptural group's representation and its placement within the existing stylistic periods of Greek sculpture have become the subject of extensive scholarship.

From this inscription, we know the name and gender of the dedicant, Nikandre, as well as some vague hint of her intention (to please the goddess). Interestingly, in addition to defining herself by her relationship to her father (Deinodikos), husband (Phraxos), and brother (Deinomenes), she refers to herself as "distinguished among women", claiming some amount of glory and emphasizing her reputation in her community. Though the inscription may imply that the statue was made on the island of Naxos, where Nikandre's family resided (an implication corroborated by the type of stone used to make the statue), it is unclear who the sculptor was or where he lived.

One of the major controversies regarding Nikandre's dedication revolves around its placement within preexisting categories of Greek sculpture, specifically the Daedalic style in the 7th century BCE and the Greek Monumental Period that followed.

The Daedalic style, exhibited by followers of the mythological inventor Daedalus (the so-called Daidalidai, such as Endios, Dipoino, Skyllis, Tektaios, et al.), flourished between 675 and 600 BCE. The following features characterize the style:
- Strict frontality
- Dress
- Shape of head
- Hair

Nikandre's dedication conforms to many of these stylistic features, with its strict frontality (the statue faces straight forward without any twisting of the body), its rigid and unrevealing dress (a peplos belted at the waist), and its neatly combed hair, which hangs in tresses on either side of the figure's head. 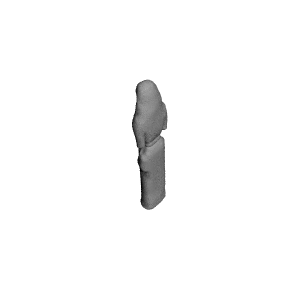