3D
Scan The World
1,923 views 79 downloads
Community Prints Add your picture
Be the first to share a picture of this printed object
0 comments

This is a classical statue of an asian woman who come from the Tang Dinasty. With her clothes, and her portrait we can deduce it.

The Tang dynasty (Chinese: 唐朝[a]) was an imperial dynasty of China preceded by the Sui dynasty and followed by the Five Dynasties and Ten Kingdoms period. It is generally regarded as a high point in Chinese civilization, and a golden age of cosmopolitan culture. Its territory, acquired through the military campaigns of its early rulers, rivaled that of the Han dynasty, and the Tang capital at Chang'an (present-day Xi'an) was the most populous city in the world. 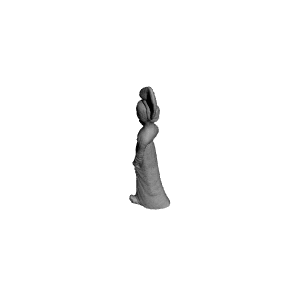