3D
360°
1,841 views 45 downloads
Community Prints Add your picture
Be the first to share a picture of this printed object
0 comments

This 3D sculpture represents the concepts of digital generation and digital fabrication that uniquely underpin 3D printing; an expression of containing all the still unknown aspirations of this disruptive technology.

I explore architecturally based geometric patterns.

My overall interest is to investigate methods which can develop forms that are in one sense predictable, but have the element to generate the unexpected; the unexpected in a predictable way.

In this series I try to explore a container; a non-traditional container that holds nothing but air. Given this, the form and surface can be reformulated and deviate from traditional meanings. The overall form can also express containing a more interconnected volume, since it holds nothing. The surface can be articulated in a number of ways, a simple mesh in this series. This series also explores 3D printing techniques in unique materials that can structurally be very delicate; pushing the technology to its limits of defining enclosures and still be structurally viable.

Forms and their structural enclosures can be explored in a number of ways, in a number of scales. Extrusions, assemblages, or incorporating traditional structural systems; or ones according to mathematically defined elements. What forms emerge when a 2D curve is used as a 3D path for some section defined by a simple shape, such as a circle, an ellipse, a square, a rectangle, or a triangle? This series investigates a simple form based on approximately one-half of a Lemniscate of Bernoulli curve, developed about 1694. It is very similar to a common eight curve, except the loops are more elliptical. For the enclosure a diagonal grid was incorporated.

These are also computationally generated, custom developed software; a method which can express a consistency of a developing concept and enable a variety that focuses on the idea and its variations.

Additional information can be found at: http://bitartworks.com/airvase01/gallery01a.html and the BitArtWorks.com website. 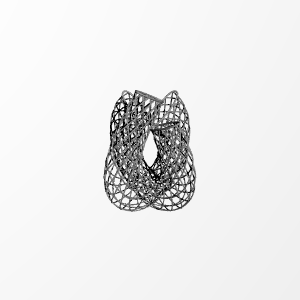