3D
Scan The World
4,225 views 359 downloads
1 collection
Community Prints Add your picture
Be the first to share a picture of this printed object
0 comments

Despiau was born at Mont-de-Marsan, Landes and attended first theÉcole des Arts Décoratifs and later the École nationale supérieure des Beaux-Arts. He began exhibiting at the Salon des Artistes Français, from 1898 to 1900; then at the less academic Société Nationale des Beaux-Arts, where he showed from 1901 to 1921, and finally to the Salon des Tuileries, where he exhibited from 1923 to 1944.

Rodin hired him as an assistant in 1907. Despiau worked with Rodin, as well as doing his own sculpture, until 1914, when he was drafted for service in the camouflage unit in World War I.

Returning to sculpture after the war, his success was established with his one-man show at the Brummer Gallery in New York in late 1927. He died in Paris in 1946.

Despiau was not a prolific sculptor, preferring to work for as long as it took to realize his vision. There are several surviving plaster statues which repeat a model with only slight variations.

His works, mostly portraits and nudes exemplifying a calm classicism, are in the collections of over thirty museums in France and over 100 museums around the world, including the Metropolitan Museum of Art. The Museum of Modern Art in New York owns the bronze Assia, perhaps his best-known work.

The largest collection is in his native Mont-de-Marsan, in a museum he shares with Robert Wlérick, established in the Donjon Lacataye. Despiau produced a total of 150 sculptures and 1,000 drawings over a fifty-year career.

Nearly there is no support & easy to clean Happy Printing. Enjoy! 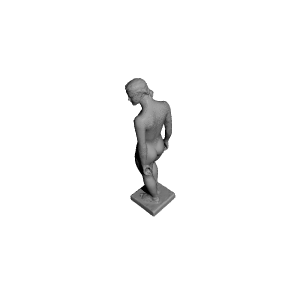 ×
1 collections where you can find Assia in Antwerp, Belgium by Scan The World