3D
Scan The World
4,477 views 348 downloads
Community Prints Add your picture
Be the first to share a picture of this printed object
0 comments

This sculpture depicts Atalante, the daughter of Iasus (or Mainalos or Schoeneus, according to Hyginus), a Boeotian (according to Hesiod), or an Arcadian princess (according to the Bibliotheca). The Bibliotheca is the only one who gives an account of Atalanta’s birth and upbringing. King Iasus wanted a son; when Atalanta was born, he left her on a mountaintop to die. Some stories say that a she-bear suckled and cared for Atalanta until hunters found and raised her, and she learned to fight and hunt as a bear would. She was later reunited with her father.

Having grown up in the wilderness, Atalanta became a fierce hunter and was always happy. She took an oath of virginity to the goddess Artemis. 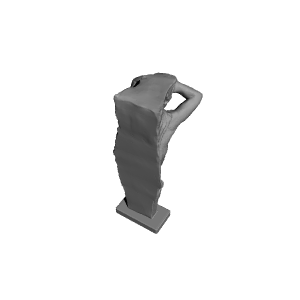 ×
0 collections where you can find Atalanta from Boulevard Anspach at The Musée Rodin, Paris by Musée Rodin