Athena at The Louvre, Paris

3D
Scan The World
3,157 views 154 downloads
Community Prints Add your picture
Be the first to share a picture of this printed object
0 comments

Athena at The Louvre, Paris

This pentelic marble sculpure was created around 50 AD and depicts Athena, part of a group sculpture 'Athena and Marsyas', the reconstructed sculpure  by Myron, Berlin. These bodies wearing a peplos appear in a series of antique replicas which are the most conserved in Frankfurt allow us to identify the walking figure as Athena. The original bronze sculpture is attributed to the sculptor Myron which was created at around 450 BC in the Acropolis of Athena. Here Athena was placed beside Marysas. The subject depicts the invention of the flute: the goddess rejecting and throwing the instrument to the ground, Marsyas descovering the instrument which he takes posession of. The chosen theme is a popular subject in threatre which leads to Marsyas' torturing and flaying by Cupid and Athena. 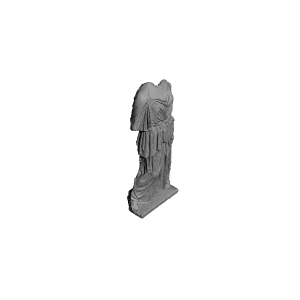 ×
0 collections where you can find Athena at The Louvre, Paris by Scan The World