3D
360°
Featured Scan The World
2,532 views 150 downloads
1 collection
Community Prints Add your picture
Be the first to share a picture of this printed object
0 comments

This is a Pseudo-Archaic Athena Promachos, also known as the Dresden Pallas.

This is a fine example of the Roman fashion for "archaising", making sculptures in imitation of the early Greek Archaic style. Archaising sculpture is characterised by the use of an amalgamation of stylistic versions of the Archaic period, such as the long parallel folds of the clothing. The features are so eclectic and stylised that these sculptures could never be believed to be of real Archaic date.

Pallas is the Roman equivalent of Athena, and the striding pose brandishing a spear aloft (promachos) was a popular subject on painted pots from earlier centuries. A colossal Athena Promachos stood on the Athenian Acropolis.

The Dresden Pallas is different from the classical 'Herculaneum Pallas'. Running down the centre of the figure's skirt are a series of panels depicting fight scenes, possible a nod to the Parthenon where the original statue would have stood near to. 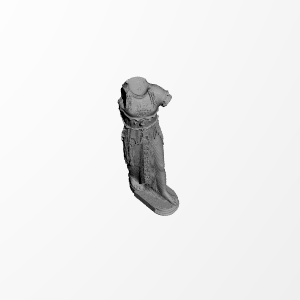 ×
1 collections where you can find Athena Promachos, the so-called Dresden Pallas by SMK - Statens Museum for Kunst